Ever get a call from your mechanic, or doctor, that starts out with the question: “Do you want the good news or the bad news first?”

Just not a good start. Especially if the doc says the good news is that, while they removed a vital organ, there was nothing wrong with it after closer examination. Good news and bad news all at the same time.

So it is with many announcements coming out of Washington, D.C. Often a mixed blessing. Example:

70-plus million federal, social security and military retirees got a 1.3% cost-of-living adjustment last January. That wasn’t much (bad news) but it was also a sign that inflation was very low (good news). Things we use and need every day — like food, medicine, housing etc. — didn’t increase much during the year. So that’s good news of the modest variety.

The good and bad news for January 2022 is that MOST of the retirees are looking at a COLA that could be worth 6%. Maybe more if inflation jumps in July, August or September. For context, June marked a record increase.

People who retire voluntarily under the FERS don’t get any cost-of-living adjustment until they reach age 62. And once they are eligible for inflation catchups, they are under the diet COLA rule, meaning that once the January COLA exceeds 2 percent, FERS retirees get less.

If the January 2022 COLA is 6%, CSRS retirees will get the full amount. FERS retirees (except for law enforcement, air traffic controllers and others under mandatory age rules) won’t get anything if they are under age 62. Those who are older will get 5% (not the anticipated 6%) next January.

A 1% loss doesn’t seem like a lot. And it isn’t if it only happens occasionally. But over a period of time, when inflation exceeds 2%, it can become a major financial problem.

Costs keep going up but the annuity doesn’t keep pace. And inflation has a way of going up big time, and for an extended period of years, when the nation is recovering from an economic downturn like the Great Recession of 2008-2009.

Now, as the nation appears to be emerging from a 16-month lockdown, prices for many things — gasoline, airline tickets, cars, medicine — are up, and still increasing.

Getting a COLA equal to 1% less than the rate of inflation could, over time, leave FERS retirees with less and less the deeper they get into retirement. You can see the pattern of inflation in the following chart. Note the big jump in inflation (and the federal Social Security COLA) in 2009 when the nation was coming out of recession: 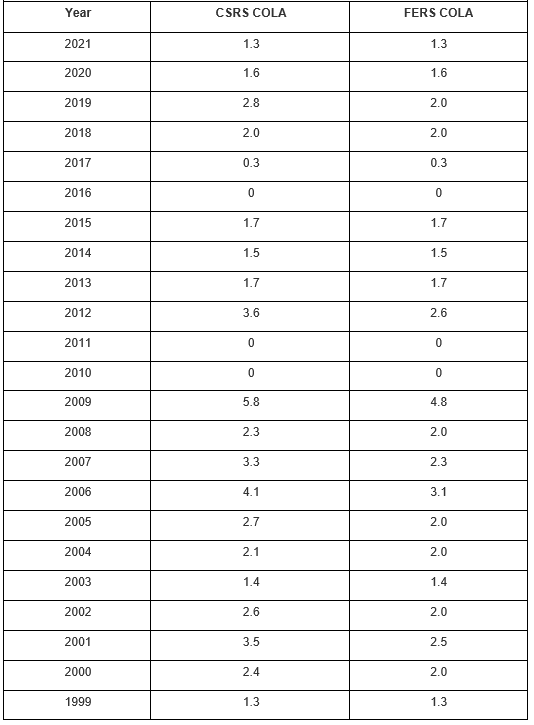 A supporter of former president Calvin Coolidge once sent a raccoon to the White House to be eaten for Thanksgiving dinner. However, the Coolidge family instead made the raccoon a pet, giving it the name “Rebecca.”