A global pandemic has few silver linings, but the ways in which telework has allowed federal agencies to stay operational during the COVID-19 crisis is arguably one of them.

Widespread telework has been so successful — and is expected to continue even after the virus subsides — that it’s prompted a tricky question: Does the federal government still need this much real estate, or can it downsize?

Remote work can help some agencies reduce their property footprint, and their carbon footprint, as Federal News Network reported in part 2 of its special report, Building Back Greener. IT innovations helped agencies administer a  myriad of operations from bioengineering to small business recovery programs.

For example, at the National Nuclear Security Administration, “you can do most of your work on the low-side at home from a regular desktop or a laptop, and you come into the facility to do whatever classified activity you have to do,” Lewis Monroe, the agency’s director of human resources, told Federal News Network in November. 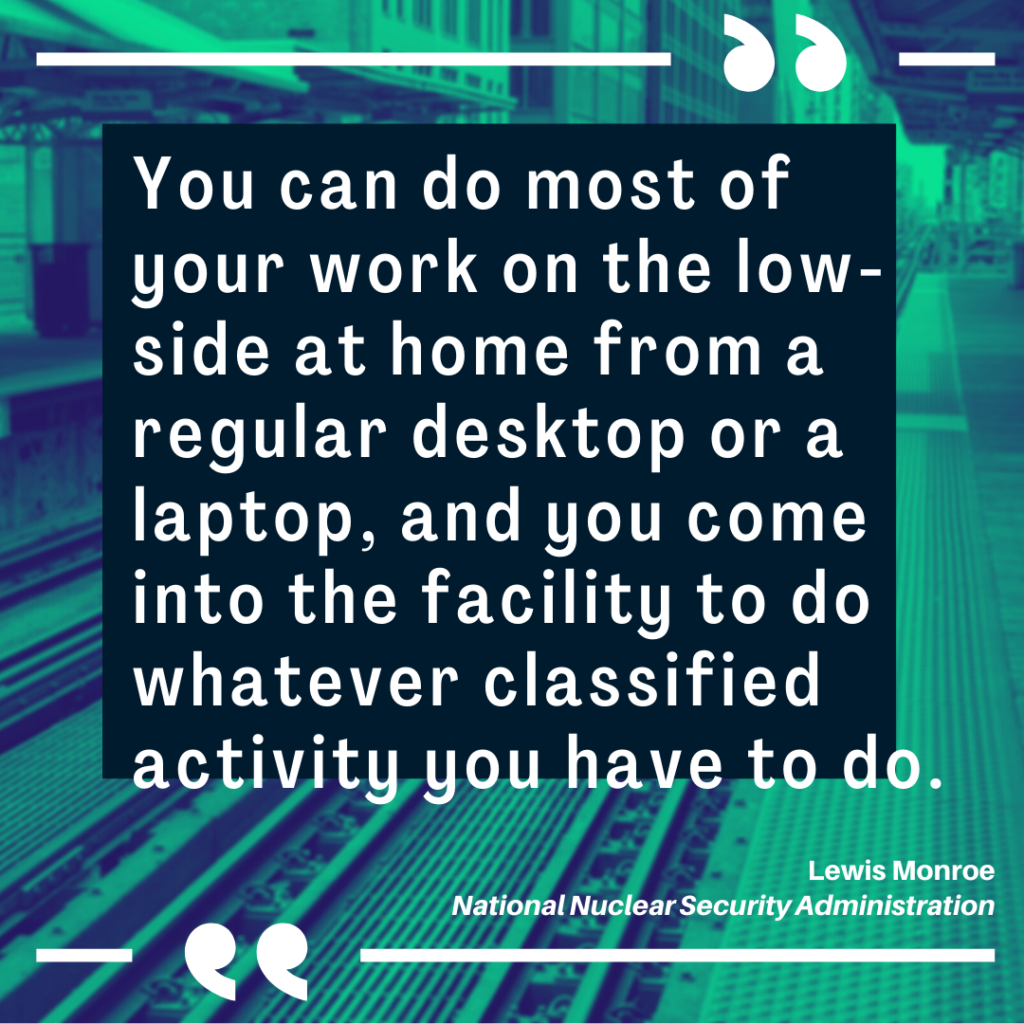 Monroe said most workers only spend about 10% of their week accessing classified material. As for NNSA’s parent agency, the Energy Department has the fourth-largest inventory of real property by square footage in the federal government: 130 million square feet, which costs about $2.6 billion in maintenance and operations annually. DOE has been looking for ways to reduce, consolidate or eliminate underutilized space over the past nearly 20 years. It purged 22.9 million gross square feet from fiscal 2002 to fiscal 2018, and its target for 2024 is a net reduction of 752,600 square feet of office and warehouse space compared to now, according to DOE’s Real Property Efficiency Plan.

Other employees considering sticking with telework post-pandemic include those in the finance offices. The Association of Government Accountants’ Annual CFO Survey revealed that chief financial officers expect to spend more on IT to handle greater network demand, but also need less real estate and utilize more hotelling models.

But eventually, worksites will need to reopen. Furthermore, as agency missions grow, so too will their real estate needs. What remains unclear is how that will look, and whether agencies reopen in a more environmentally sustainable way.

Embracing more remote work is saving private sector companies money, leading some lawmakers to ask agencies to consider the idea. Back in the summer, when the Senate Committee on Environment and Public Works held a hearing on lessons learned from pandemic telework, Kate Lister, president of consulting firm Global Workplace Analytics, used the Social Security Administration and the U.S. Patent and Trademark Office as examples.

Lister predicted the federal government could save about $110 billion over the next decade if it used more telework — without harming productivity — based on a 25% reduction in office space and having currently eligible employees teleworking half the time.

Greater telework also means less commuting and so fewer vehicle emissions. But there is a flip side: It puts public and shared transportation in a precarious situation.

Speaking to the Environmental and Public Works Committee, Michael Benjamin, chief of the Air Quality Planning and Science Division for the California Air Resources Board, said that fewer people commuting to work means less ridership on transit systems. This means lower fare revenues that force those systems to reduce or eliminate service, which then makes them less reliable or desirable for riders.

“The immediate observed decreases in public transit use and shared or pooled services have led to an increase in personal vehicle use, when travel does occur, and could lead to a preference for personal vehicle use longer-term, reversing observed gains in air quality and congestion,” Benjamin told the committee.

Indeed, the Washington, D.C., metro area, which is not transporting nearly as many federal workers today as it did at the start of 2020, saw rail and bus ridership plummet by about 71% and 74% last year, respectively. And before the system received approximately $610 million in the last COVID relief package, it planned  budget-related layoffs and service cuts for the rest of 2021.

“Furthermore, for many essential workers, public transit is often the only transportation option. Surveys have shown that currently, more that 90% of riders are using transit to commute to work, with more than 20% employed in health care services and almost 20% in food preparation,” Benjamin said. As such he called for continued investment in public transit systems.

And not everyone can telework — about 42% of federal employees were eligible in 2018 and even then just 51% of those did. That worked out to only 22% of all federal employees teleworking in 2018, according to OPM. The 2020 telework report to Congress has not been released yet, but considering the government’s operating status has been in yellow for a year now, and some agencies like the Agriculture Department are examining flexible workspace options, it’s safe to say the feasibility of  widespread telework looks different now.

Whatever worksites agencies keep open will likely have stricter standards on their ventilation systems. A GSA spokesperson said the agency wants to optimize space when workers return while still following guidance from the Centers for Disease Control and Prevention to upgrade air filtration, which impacts building energy use. If the building is only half-occupied but heating and ventilation systems are tied to central plant equipment that cannot adjust its time schedules, that gets expensive, commercial real estate blog iOptimize Reality wrote.

“The safety of the public, federal occupants and contractors will continue to be our primary driver,” the GSA spokesperson said.

At least agencies in the national capital region have some time to make arrangements, because in-office activity there is not fully resuming just yet.

D.C. office vacancies were at a record high by the fourth quarter of 2020: 15.8%, according to commercial real estate firm Jones Lang LaSalle. Two of the company’s employees, Art Russell and Lucy Kitchin, called it a “buyer’s market.” They said it was an ideal environment for consolidated leases and shifting away from stopgap leases to longer-term agreements for GSA.

“In terms of deals, right now in terms of government leasing, I’d say owners who typically had private sector folks, now want government leases,” Russell said on Federal Drive with Tom Temin. “That makes competition go up. And it makes concession packages go up as well.”

What the last recovery can teach government about going green

As Kitchin pointed out, commercial real estate was more central to the American Recovery and Reinvestment Act after the Great Recession than it was in the CARES Act. The pandemic may have put many private sector sustainability goals on hold while financial futures were uncertain, but back in the fall Jones Lang LaSalle’s chief sustainability officer Richard Batten said these goals will be a crucial part of the economic recovery.

“COVID-19 heightened the need for resilience,” he said. “Not just the operation of the buildings and transportation but also for the people working, living and thriving in our cities. COVID-19 proved what existed previously just did not work; it proved we all need to build back better, build back greener.” 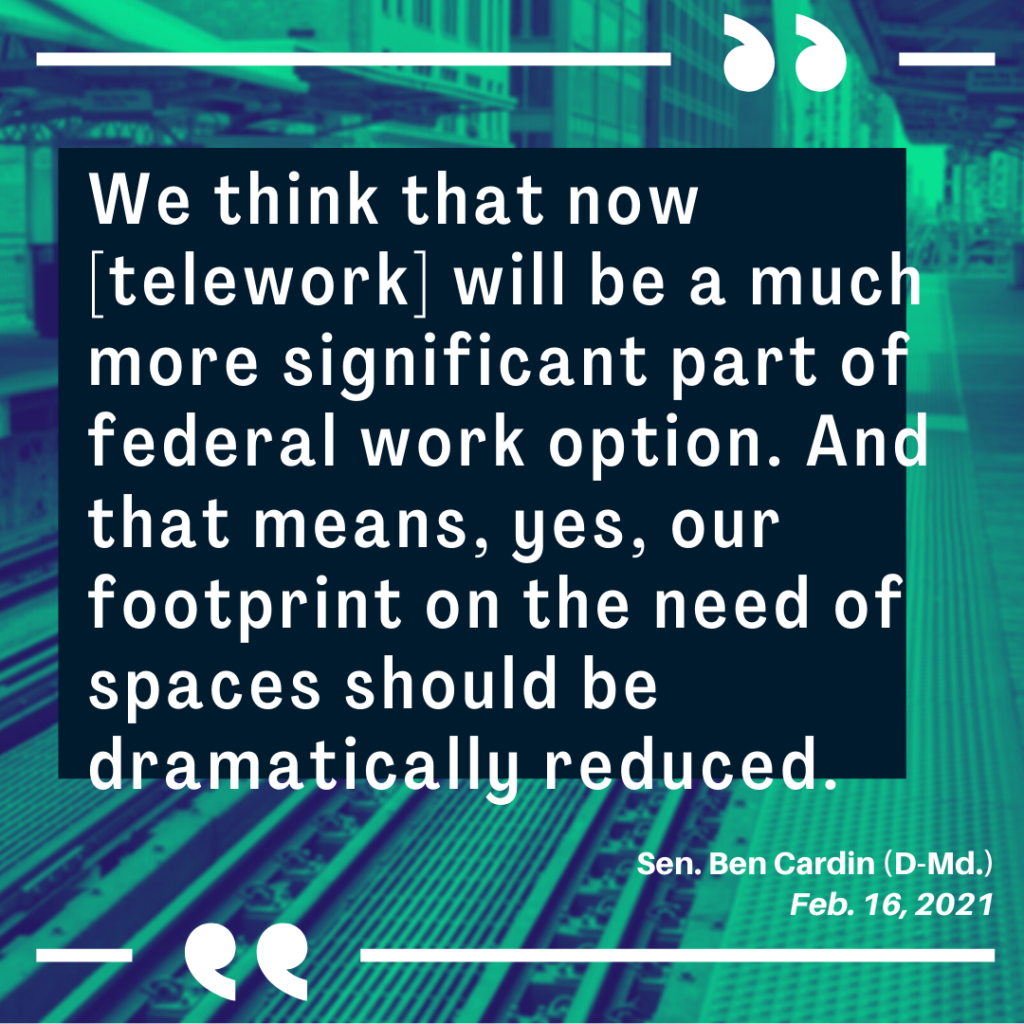 The company’s 2020 year end round up of data trends also said demand for green data center solutions showed no sign of slowing down.

That kind of thinking is behind the GREEN Buildings Jobs Act, which Sen. Ben Cardin (D-Md.) plans to reintroduce. The original bill, which he offered in December but didn’t get a vote, would have required agencies to lease spaces in buildings that in the most recent year earned the Energy Star label and had obtained a green building certification from GSA, with some exceptions. The bill also required lessors to disclose energy and water consumption data for whatever portion of the building agencies occupy.

“We think that now [telework] will be a much more significant part of federal work options. And that means, yes, our footprint on the need of spaces should be dramatically reduced,” Cardin said on Federal Drive with Tom Temin. “And I think going forward, we need to put that into the equation that will help the taxpayers of this country and will also make federal government services much more efficiently provided.”

“There’s a strategy to drive energy consumption down, better meet the real estate needs of the tenant agencies, and lower the total cost,” he said. “It takes a fair amount of know-how in the real estate world to execute a strategy like that. And it’s pretty easy to go chase, what I would argue is wasteful projects — projects that you don’t really need, or projects that will spend a lot of money upgrading a building that’s half empty.”